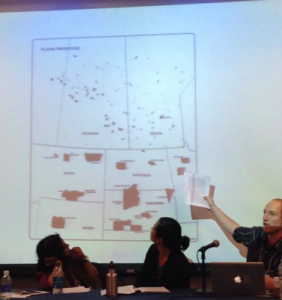 Owen Toews is the author of Stolen City: Racial Capitalism and the Making of Winnipeg, published by ARP Books in 2018. He received his PhD in geography from the City University of New York and held the University of Alberta’s Grant Notley Memorial Postdoctoral Fellowship for research in politics, history, economy, or society of Western Canada. His work examines regional geographies of racial capitalism and the local alliances, development plans, and modes of consciousness mobilized to mediate processes of economic restructuring and to achieve regional dominance. His research documents how a regional tradition of settler colonialism – as a specific expression of racial capitalism – has made and remade Winnipeg and the Canadian North-West over the past one hundred and fifty years. Through a combination of archival and ethnographic research, Stolen City examines the capitalist development plans and buried counter-plans that have established Winnipeg’s current geography of extreme racial and economic inequality. This work draws parallels between present-day dynamics of state-led gentrification and classic late-1800s Canadian settler colonialism yet goes beyond such comparisons to trace how successive economic development plans have responded to both the intended and unintended effects of earlier regional agendas to accomplish serial dispossession. He is a founding member of the DIY museum collective Winnipeg Arcades Project, a member of the abolitionist prisoner solidarity group Bar None, and acquisitions editor for ARP Books‘ Semaphore series. Born and raised in Winnipeg, he is descended from Russian Mennonites.

This entry is licensed under a Creative Commons Attribution-NonCommercial-ShareAlike 4.0 International license.

Need help with the Commons? Visit our
help page Send us a message
Skip to toolbar

Built with WordPress | Protected by Akismet | Powered by CUNY